I hope you have been enjoying the college basketball games these past weekends. Even if your favorite team isn’t in the playoffs, it’s still exciting to watch! But did you know that this time of the year is the most popular time for men to get vasectomies?

The Mayo Clinic reports that just about every year, their clinic reaches max capacity for vasectomies. And here’s why: Men schedule their vasectomies just before tournament weekend, so they can have medical time off during the games. Stay on the couch, take a couple of sick days, and enjoy basketball!

Dr. T.J. Tipton, a urologist with Roper St. Francis in Charleston, South Carolina, tells the Post and Courier that it’s a real thing. “The sport and the event itself kind of transcend basketball,” Tipton said. “They’ll come in with their Kentucky or UNC basketball shirts on.”

The New York Times quotes a study last year that found a peak in the number of vasectomies during March — and also at the end of the year during the holidays. Still, most men in this country don’t opt for sterilization: They rely on their female partners to prevent pregnancy.

In the United States, female sterilization is twice as prevalent as vasectomy, according to 2015 estimates from the United Nations — despite the fact that vasectomy is equally effective, less invasive and carries a lower risk of complications.

Dr. Anuj Khattar, a fellow with Physicians for Reproductive Health who practices in the Seattle area, tells the Times that after the initial consultation, 20 to 30 percent of his patients end up either changing their minds or simply not showing up for the procedure.

“I think part of the fears around vasectomy is that it’s so permanent,” Dr. Khattar said, adding that some men worry about “losing some of their virility and their ability to enjoy sex” even though, the doctor said, it doesn’t affect any of those functions.

The article also looks at the risks involved between vasectomies and tubal ligation for women: “Unlike vasectomy, which is a quick outpatient procedure to cut and seal the tubes that carry sperm and block the transfer of sperm to the ejaculate, tubal ligation is far more invasive and often conducted under general anesthesia.” 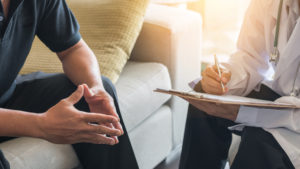 The article continues, “The surgery, which involves cutting or blocking the fallopian tubes, carries higher rates of complications, including damage to surrounding organs, said Dr. Holly Bullock, an assistant professor in the department of obstetrics and gynecology at the University of Arizona Colleg of Medicine in Tucson.”