Is Sex Recession a Real Thing?

With dating apps everywhere, birth control readily available and social taboos about sex easing among most Americans, you would think, as one article states, “these should be boom times for sex.” Instead, some researchers say we are now in a sex recession.

In an article in The Atlantic by Kate Julian, researchers cite statistics that show the rates of teens and young adults having sex are dropping. From 1991 to 2017, the Centers for Disease Control and Prevention’s Youth Risk Behavior survey shows the percentage of high school students having sex dropped from 54 percent to 40 percent. 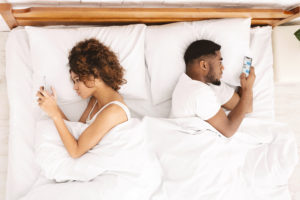 And young adults seem to be following the same pattern. Jean M. Twenge, a psychology professor at San Diego State University who has published research exploring how and why Americans’ sex lives may be ebbing, says young adults are on track to have fewer sex partners than the two preceding generations.  People now in their early 20s are two and a half times as likely to be abstinent as Gen Xers were at that age, she found; 15 percent report having had no sex since they reached adulthood.

So why is this? Anthropologist Helen Fisher points out that fewer people have been marrying for the last quarter century, and those who do marry have been marrying later. And one in three adults under age 35 live with their parents—not the greatest atmosphere for a love life.

Other reasons, researchers say, could be sleep deprivation, sleep quality (because we check our phones overnight) and, speaking of phones, the isolation over having conversations on the phone and not face to face.

Just like other recessions, though, Julian says this recession, too, shall pass. “A fulfilling sex life is not necessary for a good life, of course, but lots of research confirms that it contributes to one,” she says. “Having sex is associated not only with happiness, but with a slew of other health benefits. The relationship between sex and wellness, perhaps unsurprisingly, goes both ways: The better off you are, the better off your sex life is, and vice versa.”

At Pure Romance, we’re all about ending the sex recession! And if you’d like to read more about what the “sex recession” may mean, check out the article here!