Sex at Any Age

Do you ever think that society believes only young people have sex? From advertising to TV and movies, we usually see couples under 40 in intimate relationships. Anyone older than that usually plays the wise patriarch or matriarch of the family, doling out sage advice and seemingly living life without sex.

Well, we know better than that—in fact, couples often say that sex gets better as they get older. A recent interview on NPR with author Darcey Steinke talks about menopause and sex, and some of the misperceptions surrounding both. Her book, Flash Count Diary: Menopause and the Vindication of Natural Life looks at the author’s own experience navigating the attitudes of others about an older woman’s role regarding sex. In her opinion, if couples are willing to think beyond traditional intercourse, they will find their relationships are more intimate than ever. And, she adds, “don’t be afraid to use lots of lubrication.”

Steinke said she had to get used to the changes in herself during menopause. “I felt my very femininity was in question,” she noted. “I didn’t have a lot of the female signifiers that I once had. My hair wasn’t as smooth. I can remember a waiter once saying ‘Sir’ to me and I was like, ‘Oh my gosh. Wow. This is a whole new territory.”

As for sex, Steinke said it did change for her after menopause. “It was a gradual process,” she said. “I do remember feeling less interested in intercourse. I actually felt like it was sort of uncomfortable. Your body changes and you don’t have as much lubrication. But that is so easily fixed by lube.” 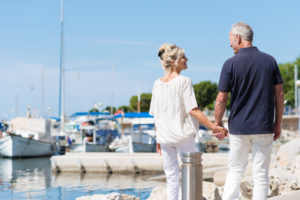 Not only did Steinke interview women about menopause and sex, she talked with more than two dozen men about how they handled their partner’s body changes. While some men said their partners didn’t want to have sex anymore, others said there was less sex but more hugging and cuddling, which the men liked.

“One man that was the most verbal about this told me that he felt like sex was now connected more to play,” she said. “There was a lightness there. The pressure is gone.”

Her advice for women whose bodies are changing? “You have to have these discussions. Things are changing. You can deny all this and just decide not to be physical anymore. But if you go into it, the level of intimacy is kind of mind-blowing. That’s really beautiful. I would hate to miss it.”

Want to read more? Check out the link to the NPR story here.