Just as October is set aside for women’s health issues, especially breast cancer, the month of June is a time to focus on men’s health. You might have noticed major league baseball teams wearing touches of light blue on their uniforms this month to raise awareness of prostate cancer issues.

But having a month to concentrate on men’s health doesn’t mean men are necessarily going to open up about their health issues—especially sexual health, according to a study commissioned by Orlando Health.

The survey found that men under the age of 35 were far behind women of the same age in talking about not just sexual health, but health problems that might run in families such as cancer or mental illness. 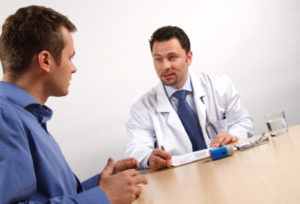 Dr. Jain Brahmbhatt and Dr. Sijo Parakattil, both urologists at Orlando Health, led the study. The findings revealed that learning about family health history at a younger age is important, because between the ages of 18 and 34 is when men are likely to be most sexually active and also most likely to start a family.  Knowing the risks, the doctors say, can help men notice any developing symptoms and start medical treatment as soon as possible.

Dr. Brahmbhatt added that “It’s okay to talk to your friends and family (about sexual as well as overall health) and it’s really not as awkward as a lot of guys think.”

Have you talked with your husband or boyfriend about sexual health? Don’t wait for him to start the conversation. Let him know it’s all right to have questions—especially during his visits to the doctor.

A good way to start that conversation is by sharing this article: Read more at http://www.deccanchronicle.com/lifestyle/sex-and-relationship/310517/men-tend-to-avoid-talking-about-sexual-health-study.html