Growing up, I wasn’t the biggest fan of boxing; I couldn’t get past the fact that it appeared to be nothing but fighting. Now my family – that was another story. One of my relatives actually had Rocky Marciano as his Best Man, and that was something that made my dad especially proud. The closest thing I came to boxing was buying a Foreman Grill at the height of its popularity, but I never watched a George Foreman boxing match in all my years.

However, when the Guns N’ Hoses Southwest Ohio fundraising event was brought to my attention, I was excited to get involved. The match was held at the Horseshoe Casino on October 9th and benefitted the families of firefighters and law enforcement officers who have fallen in the line of duty. The boxing tournament featured three, one minute round matches between area Law Enforcement Officers and Firefighters. The winner of each bout received a Championship Belt, and the runner up received a medal.

This foundation especially resonated for me because they were the organization responsible for funding Sonny Kim’s family to travel to the United States for his funeral – travel that would not have been possible if they would have had to wait for standard procedures surrounding benefits associated with this type of tragedy. For example, state funding sometimes isn’t available until 8-12 months after our heroes have fallen.

I was so proud that Pure Romance was able to sponsor such a noble cause, and give back to those who have sacrificed so much in service to our community. The organizers treated me to a wonderful surprise, inviting me into the ring to accept a championship belt in recognition of Pure Romance for being one of the top supporters of the event. 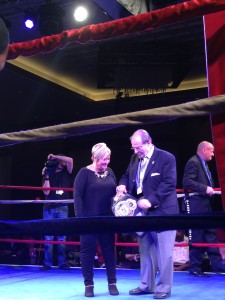 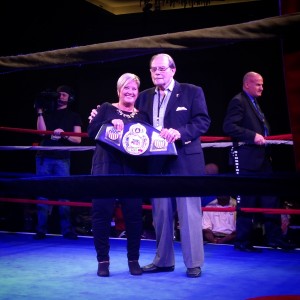 One of the biggest surprises of the night was when I found myself jumping up and down out of my seat screaming in excitement for several boxers. I couldn’t help myself from reading all of the bios in the program, and I’m pleased to say that out of 21 fights, I had predicted 17 wins right! (Look out, Vegas; I might have to share my predictions for some big up and coming matches!J)

This amazing organization and their outstanding event are proof that giving back can really be fun. I came out of this experience a changed person and learned a little more about a sport that I had previously misjudged. Who knows what can happen when you make an effort to give back to causes that are important to you!