Yes, You Can Have Sex During the Eclipse

Somewhere around midday today (depending on your time zone) most of the United States will get to experience most of, if not a total, solar eclipse. You’ve heard all the warnings about protecting your eyes during the eclipse, but did you know about some of the myths and superstitions involving an eclipse and sex?

According to listverse.com, all kinds of folklore surrounds an eclipse. In Medieval times, people believed that sex during an eclipse would result in ugly demon-filled children. A modern superstition also has it that a pregnant woman shouldn’t touch her belly during an eclipse. Doing so will cause the baby to be born with a birthmark, the size of which depends on the force of the touch. 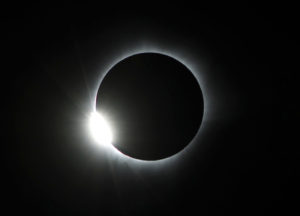 USA Today also lists a few more superstitions surrounding an eclipse, including warning pregnant women to not go outside during the eclipse. It’s believed pregnant women who are in the presence of the eclipse could cause their baby to have facial deformities or birth marks.

While there isn’t a proven reason why women who are expecting shouldn’t go outside during the event, we know you’re not supposed to look directly at the eclipse without eye protection. Suffice it to say, there are no proven eclipse-related health concerns specific to pregnant women or their babies.

And here’s one from ABC news about sex and the eclipse that’s particularly interesting: German myth has the cold and lazy male moon ignoring the fiery passionate female sun (!!) during the day most of the time, except for a few bits of passion they share during an eclipse. Then they’d squabble and the sun would resume shining again, doing fine all by herself.

In western Africa, it’s the same theme—the occasional and furtive rendezvous–but this time between the male sun and female moon, with the couple modestly turning out the lights during an eclipse.

The ad describes a “lakefront penthouse suite at a beautiful B&B” with water sports, hiking and mor

e. (What could go wrong at a B&B for four days with a perfect stranger?) And, at the peak of the eclipse, “it will be completely dark for 2 minutes and 24 seconds.” No word if there are any takers.

No matter how you experience it, a solar eclipse is a rare event that you should check out, but safely. Go ahead–feel free to have sex during the eclipse, despite the myths—and when the eclipse is over, you AND the sun will be glowing!