Remember the advertising tag line, “You’re not getting older, you’re getting better”? I certainly believe that, and you should, too! After a few years of experience under our belts, we understand what, and who, are important in our lives, and we get a better sense of what we want to do. That’s why so many women, after spending time in a job that perhaps is not as fulfilling as they’d like, are switching careers later in life. 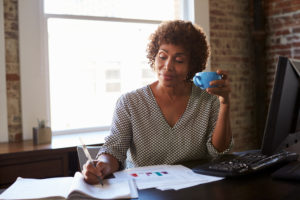 A recent article in Forbes suggests that women over 50 hoping to launch a business have advantages that perhaps a younger female entrepreneur might not. “Generally, this is a time in their life when their responsibilities as a mother are substantially less and more easily managed in comparison to those women who are in the child-bearing and early child-rearing stages,” according to Kimberly A. Eddleston, professor at Northeastern University.

She also says having worked earlier in your life can prepare you for owning your own business later in life. “The added work experience and the associated boost to their self-confidence significantly assists in the development of their businesses,” said Eddleston.

Women are increasingly taking control of their own careers. In fact, women now make up 40% of new entrepreneurs in the United States — the highest percentage since 1996, according to the Kauffman Index of Startup Activity. What’s the attraction? In a recent survey, Paychex asked 1,000 aspiring business owners how they feel, and what they fear, about the prospect of working for themselves. Women were more likely than men to say they were eager to start businesses because they wanted to work for themselves.

So many of our Consultants have taken charge of their lives, and their finances, by becoming small business owners through Pure Romance. And as the Forbes article shows, it’s never too late to be your own boss! Read more from the article here!